Imagine a love story that never had the chance to flourish, instead will forever be tainted with sadness and death, and a house, built with an overwhelming sense of romance and promise, never to see the light of day, now given up to ghosts that have taken residence in what should have been a happy home filled with light, love and family; such a house is known as The Abbey…. 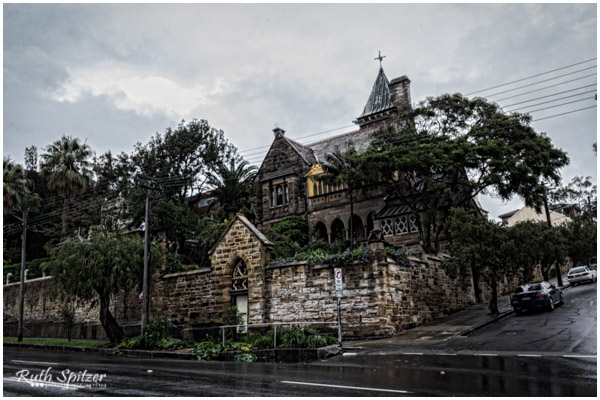 Today (March 2014), I ventured down to a suburb called Annandale once again, in the hope of catching a glimpse of the gardens, and run my fingers along stone walls that has stood for 133 years, and possibly see the infamous ‘lady in white’ who is rumoured to roam at the top of the tower.  But the Abbey remains hidden behind high sandstone, free from the prying and curious eyes of the public.

Here is a love story so sad and tragic. All that remains behind of the promise of that love is a stunning 50-room Gothic mansion,  haunted by live-in ghosts who co-habit with its present owners. 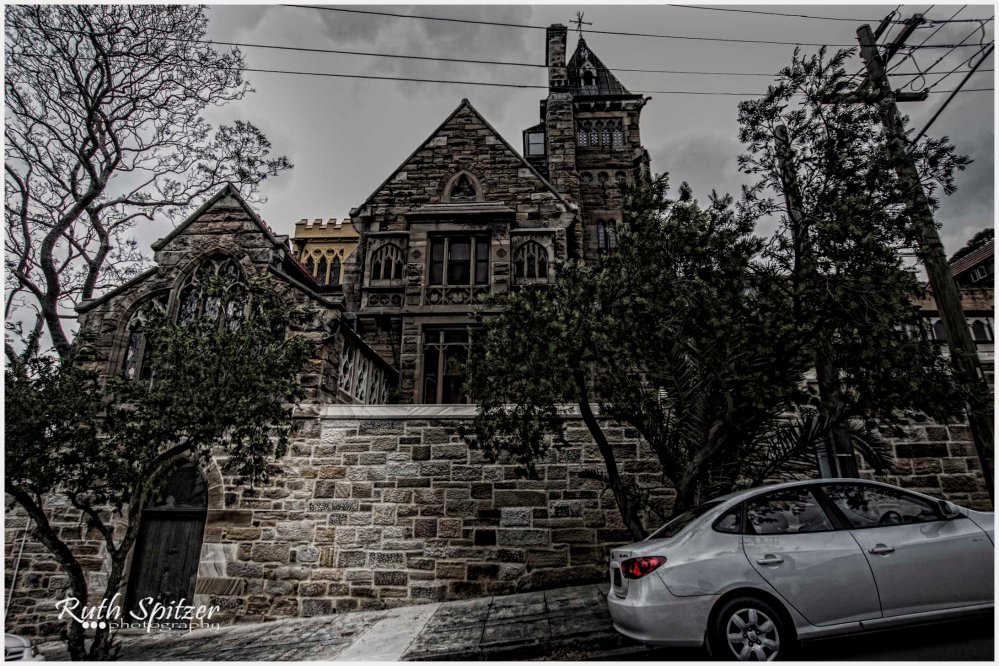 Albeit ‘house’ would be the understatement of the century.  At No 272 Johnston Street in a suburb of Annandale in Sydney, New South Wales, Australia, stands a stone Gothic Mansion, (known as the Witches’ House), modelled on a Scottish manor and built by John Young, master builder, engineer and masoner, who migrated from England to Australia and lived in Melbourne for a period before moving to Sydney, where in 1877, he bought land in what is today the suburb of Annandale in Sydney, with the intention of creating a garden suburb to rival our harbourside suburbs such as Darling Point. 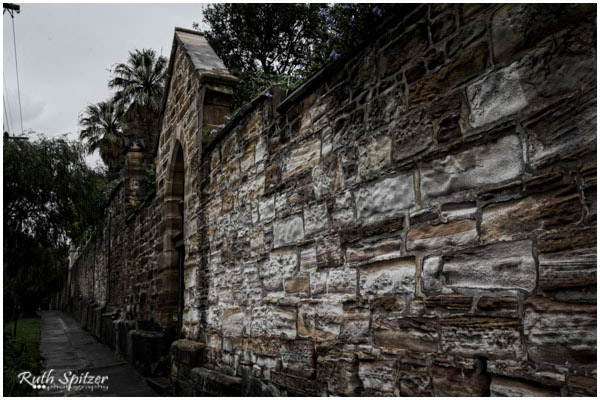 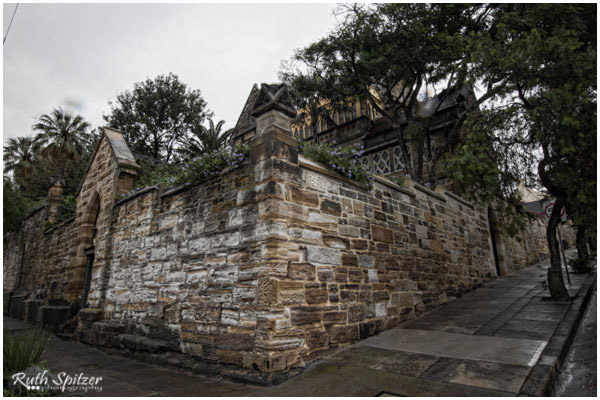 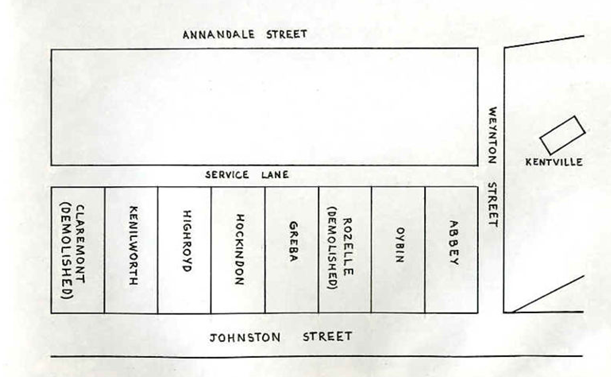 Street Plan taken from Annandale –The Houses of John Young

Of these 8 homes, the Abbey was by far the most spectacular, modeled on a romantic Scottish manor in a variation of the Victorian Free Gothic Style, encompassing stencil work, timber architraves, a Gothic Vault, hand-painted panels, gables, arches, lions, gargoyles, quatrefoils, chimneys, turrets, a cloister and a tower with copper cladding, and rumoured that Young might have stolen the Gargoyles from the St Mary’s Cathedral in Sydney, where he was the principal builder.  In addition, reinforced concrete was used, which in those days was considered quite an innovation.  The house, in all its splendour, was completed in 1882.

The sole purpose for Young sparing no expense for such a grand design and undoubted  uniqueness, comes down to good old fashion love.  His one reason for the Abbey being so unique was to lure his wife in the hopes that she would return from the UK to live with him in Australia.  Alas, she did not and died whilst on a ship bound for Australia, and so John Young could not bring himself to reside at the Abbey and instead lived in a house called Kentville (near Rozelle), while only housekeepers occupied the Abbey. 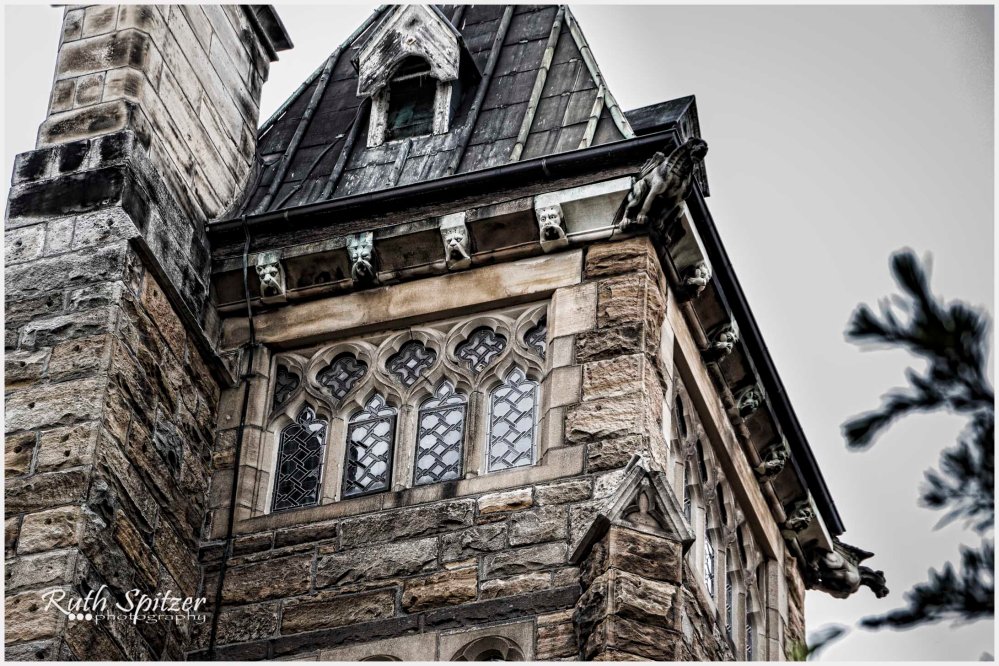 From 1887, the Ballroom and Stables were converted and used as a boarding house for private Sydney schools, until  1924, when the mansion was subdivided and converted into flats, which turned out to be the beginning of a long period of sad decline. 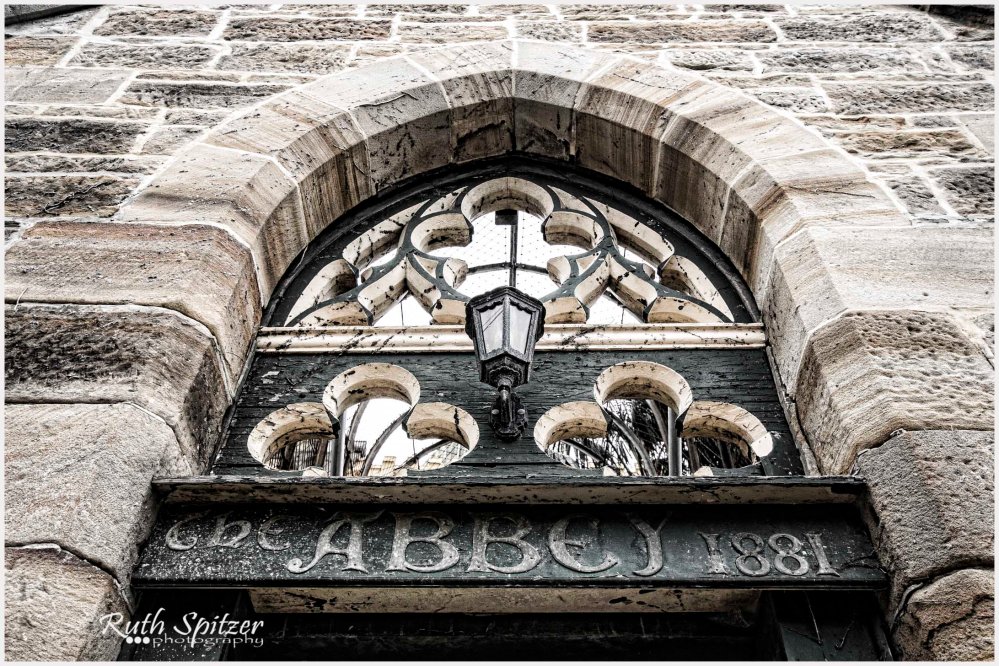 Thankfully in 1959, this grandiose erection of once breathtaking beauty, was rescued and purchased by radio engineer Lancelot Davis for £4500 for his son Dr. Geoffrey Davis who continued to lease out some of the original separate units to artists for 2 decades while he began the long process of restoring the Abbey to her former glory.  During this time the Abbey was occupied for over 50 years by the Davis family who resided  in the former servant’s quarters, along with cats (their trusty barometer for spectral activity) and the mysterious Lady in White, who is said to roam the tower.

The 7 Davis children all claim the house is haunted by ghosts.  Francesca Davis, raised in the house with her brother Gervase and 5 siblings, says “Everyone has a ghost story to tell”.   The basement and main bedrooms are notorious for ghosts.  Other oddities include doors and windows opening and closing of their own accord, visitors catching glimpses of dark shadowy figures and of course the Lady in White who roams.

How incredible that I live in a country where I’m able to view such history ‘in the flesh’. What I wouldn’t give to be able to take one visit through the mansion. To roam the halls, touch the grand staircase, feel the floorboards creek beneath my weight and what a treat it would be to experience some sort of paranormal activity, of the friendly kind, of course.

However on this fairly nondescript day in 2013, I ventured to Annandale, a 40 minute drive from home.  I’m first struck by the enormous width of the street and literally find angled parking right outside the small front gate of No 272 Johnston Street, which oddly seems so inept for such a grand structure.  One would expect a high spiked fence with ornate design; complete with gargoyles keeping vigil or at the very least a large old weathered rusty door knocker.  Instead I’m greeted by a humble yet beautifully carved arch and a simple wood panelled door that reminded me of being back home in South Africa.  A strangely comforting feel.

As I gaze at the house, one can’t help but wonder what it must’ve been like living at The Abbey centuries ago and then try and picture the interior now.  You wonder how much of the design remains part of the original plan, have the appliances and plumbing been replaced with modern, are the hallways dark or airy and light, what boards or carpeting dress the floors.  I’m certainly envious of her current residents.  And so sad that I never knew about this treasure when it was up for auction. I might have stood a chance of glimpsing the interior.   But I digress – back to the last bit of history that is The Abbey and where it is today …

When Dr Davis passed in 2008, the contents of the house were auctioned off by Lawson Auctioneers in May 2009, and the house sold to Michael Hogan, his wife and son Nick in November 2009 for AUD$4.86 million.  Some of the contents auctioned include dusty collection of great books, music, instruments including a harp, grand pianos and gramophones, revolving bookcases, and even 4 lamps that once lit the Sydney Harbour Bridge.

For those who are lucky enough to live in Sydney and have the opportunity, I would highly recommend a visit to Johnston street Annandale, whether to be mesmerized by an over powering structure that still stands 133 years later or to appreciate the care and attention to detail in all the intricate patterns and design from the roofing tiles to the gutters.

And just to reinforce that this house has seen so many family, friends, visitors who have had the privelage of either growing up in The Abbey or being a temporary resident.  Here are some letters from actual tenants who have lived at The Abbey over the course of her 133 years of existence, regaling their tales and experiences of their time on Johnston Street.  The Abbey, Johnston Street