What can only be described as an extraordinary eclectic dress up party like none I’ve ever witnessed before. It rivals the concept of wacky.  Bizarre, yet strangely normal in the setting.  It’s enthralling, mesmerising, exciting, eccentric and everything in between.

How to describe this event to one who has never heard of or witnessed before is somewhat of a conundrum.  I can only stress ‘you had to be there’ and to encourage any curious soul who might want to make a trip to Lithgow in the future.

There are several words that spring to mind when reminiscing about my first time attending the Lithgow Ironfest.  The talk leading up to this event, naturally leaves one with certain expectations in mind coupled with your own conjuring’s, when all you have are photos to go on from past festivals to complete your picture.  Suffice to say it leaves one with anticipations of the highest kind.

And so a girls weekend away to the Blue Mountains in New South Wales, visiting Lithgow Ironfest and taking in the beautiful colours of autumn at Mount Wilson, for the Autumn Festival in full bloom. 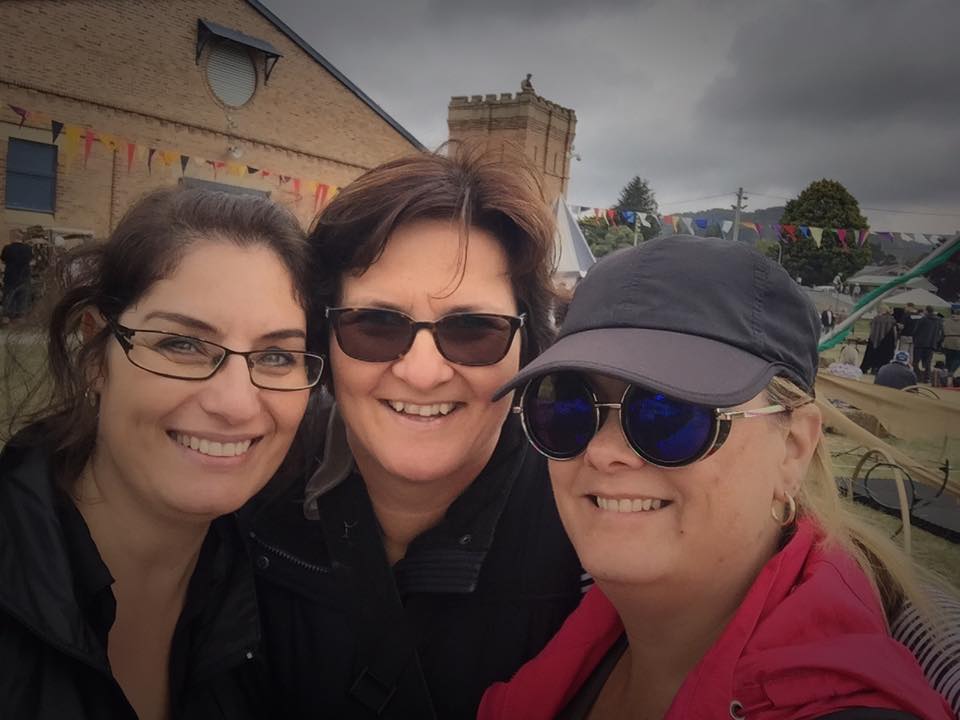 Ironfest has been talked about with many a description in an attempt to convey all that this event entails and all I can surmise is, it’s an artistic medieval festival exploring the interactions between humans, past and present, the birth and history of metal, design makers, historical re-enactors, performers of all kinds from all possible realms, steampunk’ers, blacksmiths, cosplay, musicians and falconry displays.

Here, we were witness to several staged battles from different periods of history.  Numerous armoured vehicles firing off hundreds of rounds of ammunition and setting off explosive devices and tanks firing canons.

A bevy of excitement and deafening noise and we had front row seats to the action amere 5 meters away. One gets a small inkling of what an actual battlefield might have been like. The ground rumbles and reverberates through your body in a tremor of excitement, fear and bewilderment.  There’s chaos and a rollercoaster of sounds from bombs going off, gunfire spurting, an exploding car, deafening screams as soldiers attack, dressed in period-themed armour, charging their enemy using swords, axes, and a plethora of other weapons.  It’s a sensory overload. 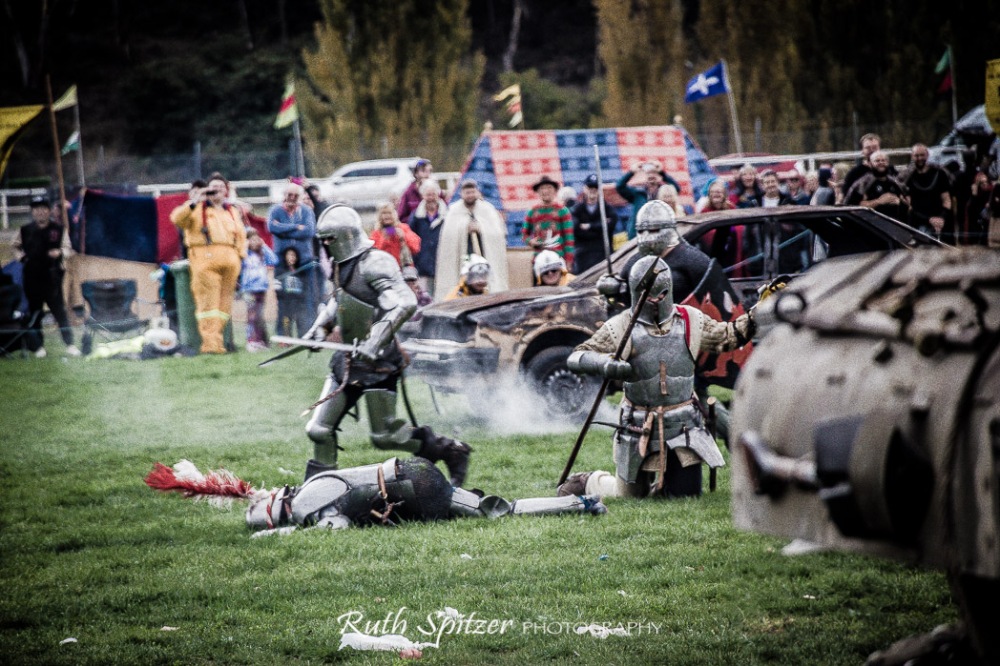 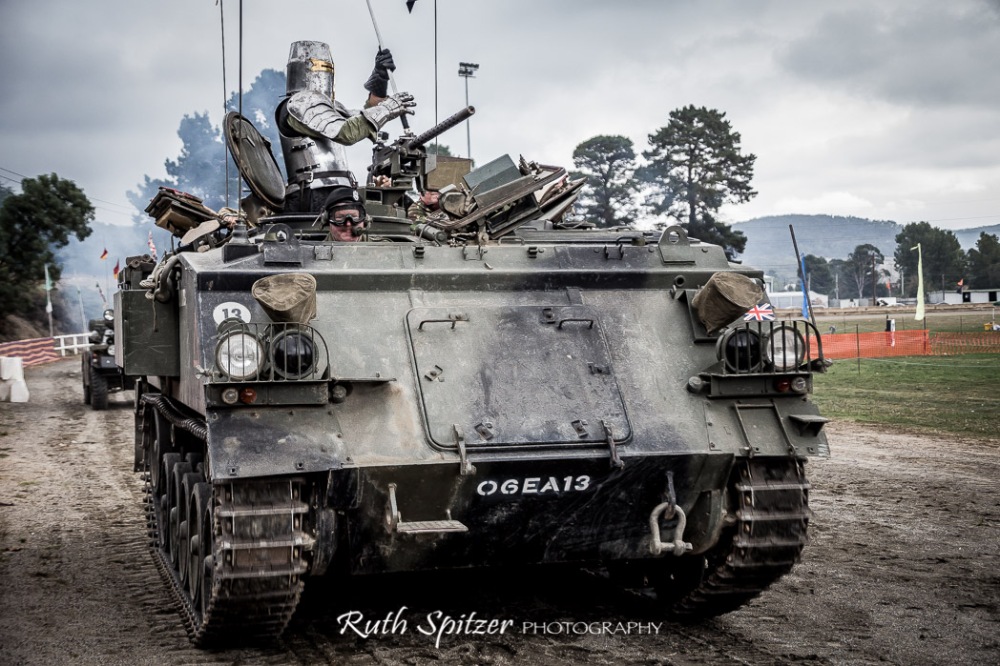 Following the war, all participants; soldiers, cosplay characters and volunteers, literally walked every inch of the ‘battlefield’ collecting hundreds of discarded shells for proper disposal.

One of the targets for destruction in our mock war, a symphony of flames as a car explodes, followed by a solid screen of endless smoke – very exciting.

And of course, safety first in Australia.  Can’t have a car left burning in the middle of a field with people around. Firefighters and state of the set hoses sadly did not fit with the 18 century theme. A succession line of water filled buckets passed from one person to another would have been far more entertaining and authentic. 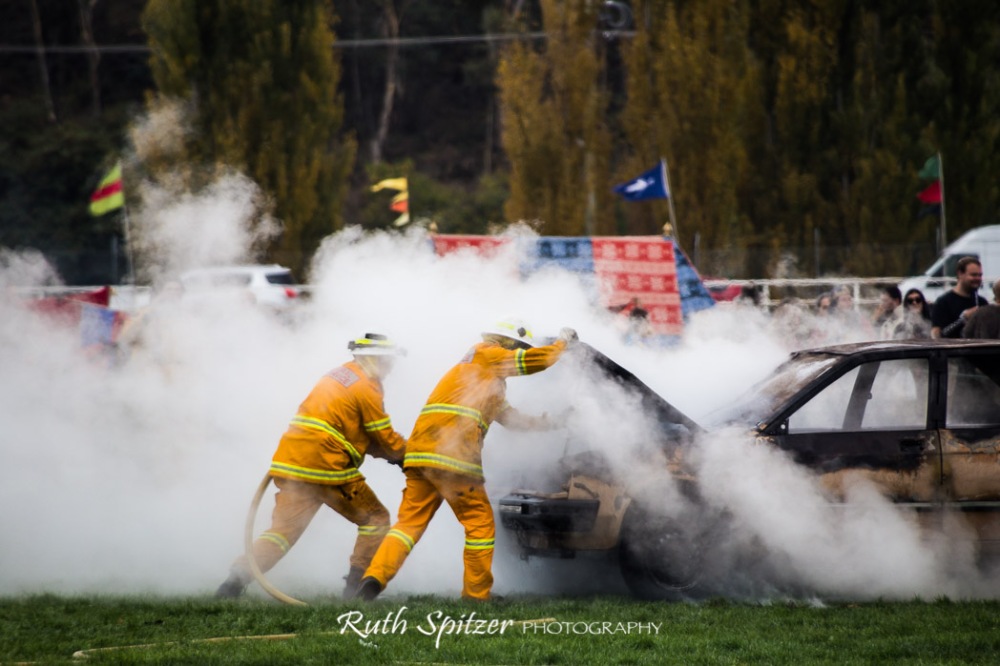 Theatrics and costumes aside, visitors to the festival could also enjoy browsing a multitude of stores for medieval merchandise and enjoy watching blackmiths at work. 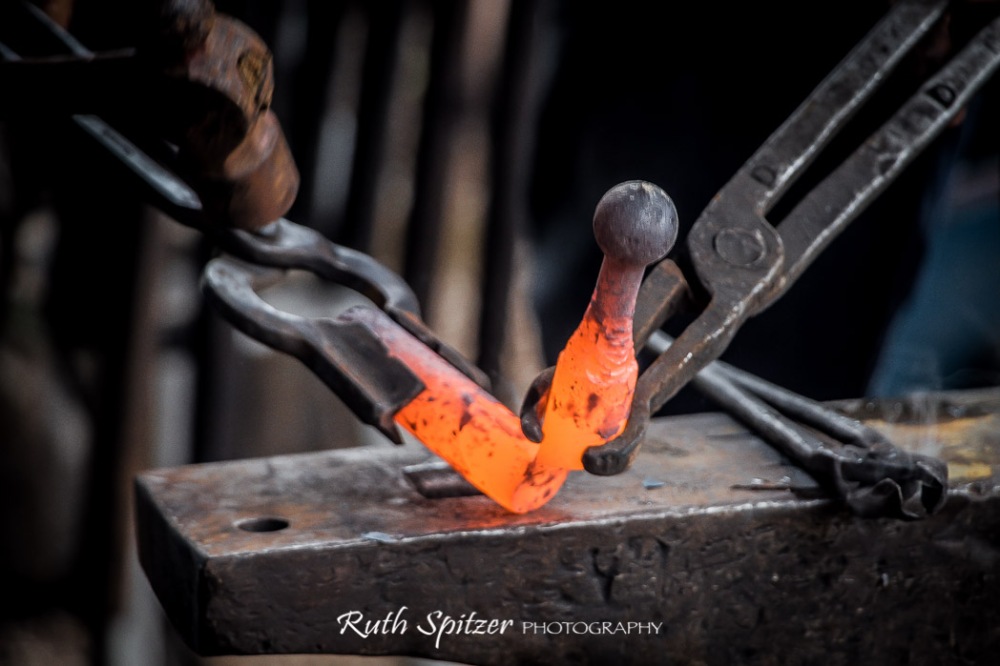 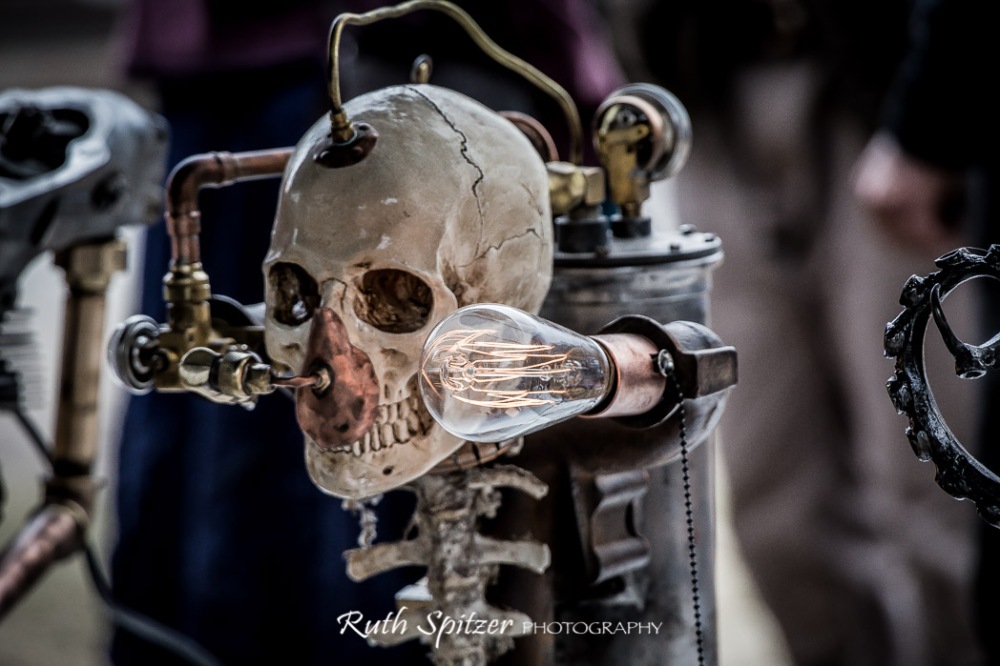 Below, Melbournian born Aerial Manx (a.k.a Jason Loughron), in 2008, aged 22, performed the worlds first sword swallowing act while doing a handstand.  And we had the opportunity to view his act at Ironfest. Crazy. 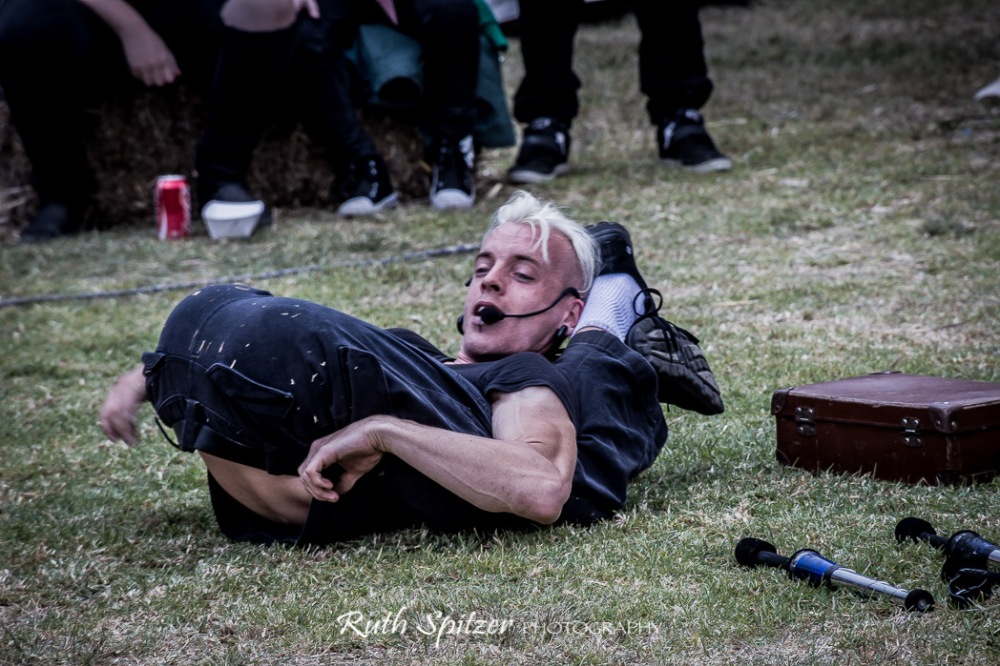 Over the years, inception of the Lithgow Ironfest began as a mere art exhibition in a number of shops along the East End Main Street attracting around 400 people. The following year expanded to Museums, the Blast Furnace and Talisman Gallery, and 700 visitors.

In 2002/2003, growing bigger, the event relocated to the State Mine Museum, where for the first time, metamorphosed into a real festival to include artists, performers and re-enactors.

Continuing to expand, 2004 saw it change venues again to where it now currently resides annually at the Lithgow Showgrounds, attracting over 15,000 visitors.

A true sensory overload and eye candy to boot. Activities ranged from Live War Re-enactments of different periods, Live Wrestling Matches, Circus Performances, Jousting Matches, Archery competitions, a real live Gothic Wedding, a Contortionist and sword swallowing act to name a few, but the true magic of the event comes from the dedication and passion of the participants whom we discovered spend months in advance planning their costumes, sourcing various aspects from ebay, to home-made contraptions or self-haberdashery creations, local costume stores, overseas purchases.  The creativity that went into some of the costumes, something to truly marvel at.

Below, we were witness to a legal marriage.  Yes legal and somewhat bizarre considering most brides imagine themselves walking down an isle lined with exotic flowers, candles, romantic music, the bride adorned in elegant white and the groom, dressed in a well tailored suit.  This was a wedding with a difference.  Goth meets medieval and a whole lot of non tradition.

The bride walked down not a aisle but a large green patch of grass, dressed in black and not to a waiting groom. No siree, the groom in this scenario had to first fight a battle of swords to prove his worth to his bride, before the ceremony could move ahead.

Below, the celebrant/Knight who performed the ceremony. 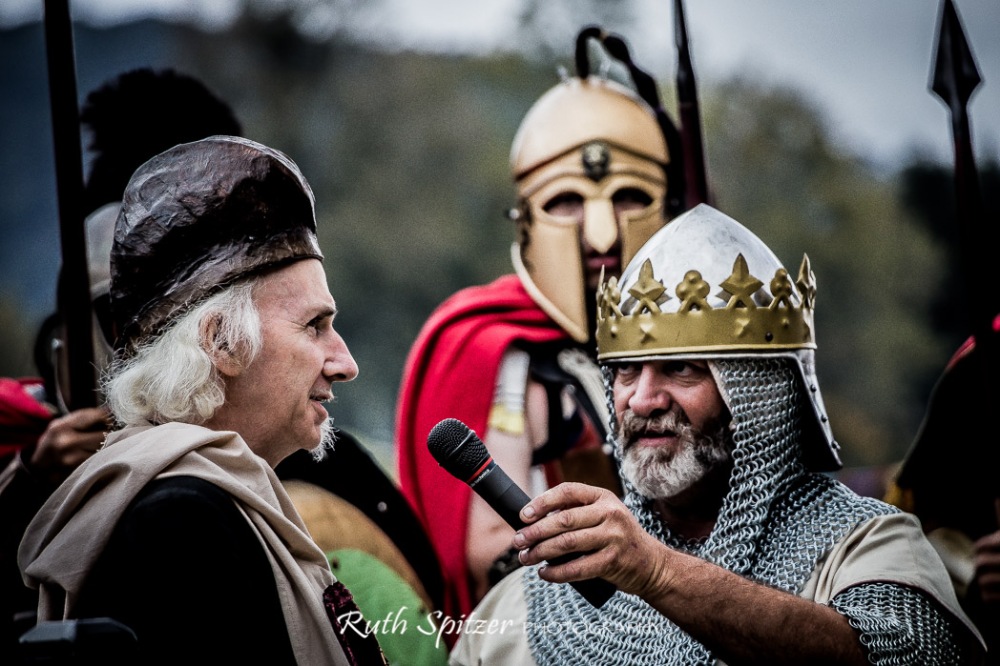 Image below, some of the characters that paraded over the days ranging from The Joker, vegabonds, rouges, Knights of the round table, Jedi, Freddy Kruger, 1800 century wenches.  A bevy of colour and characters. 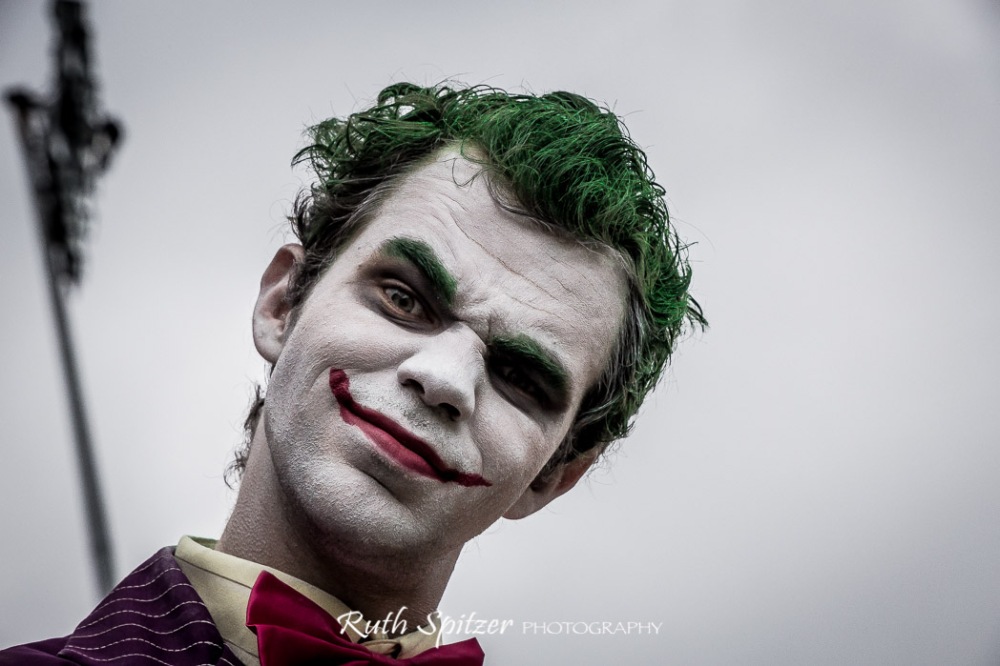 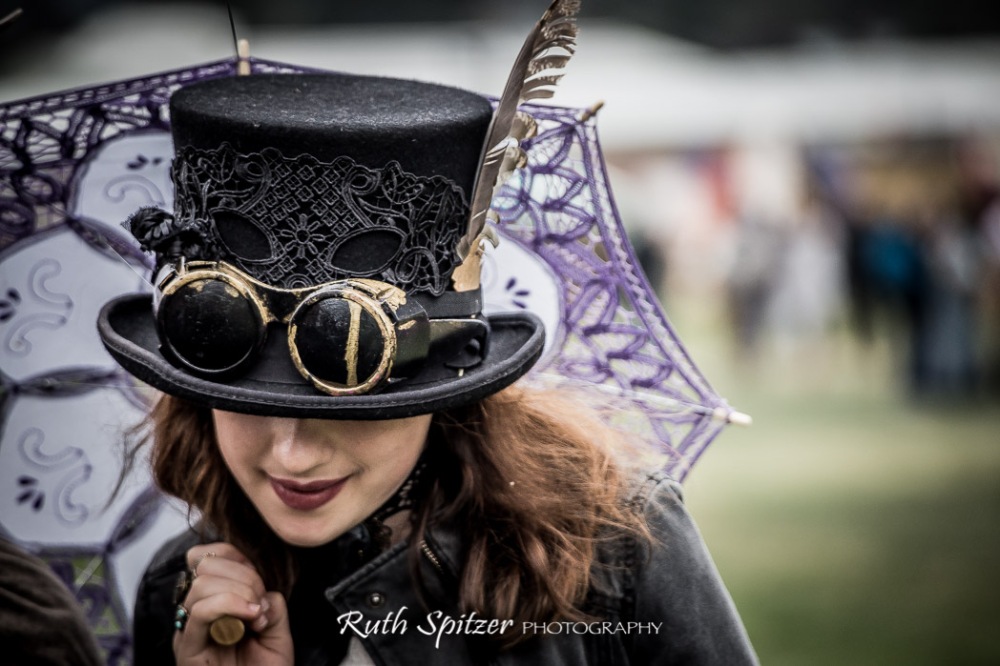 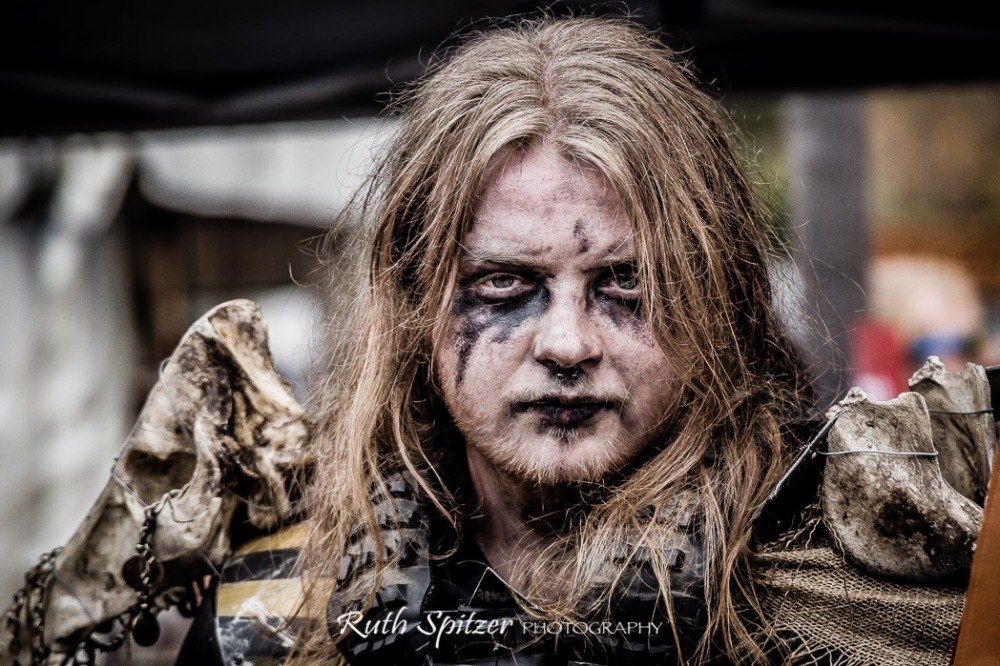 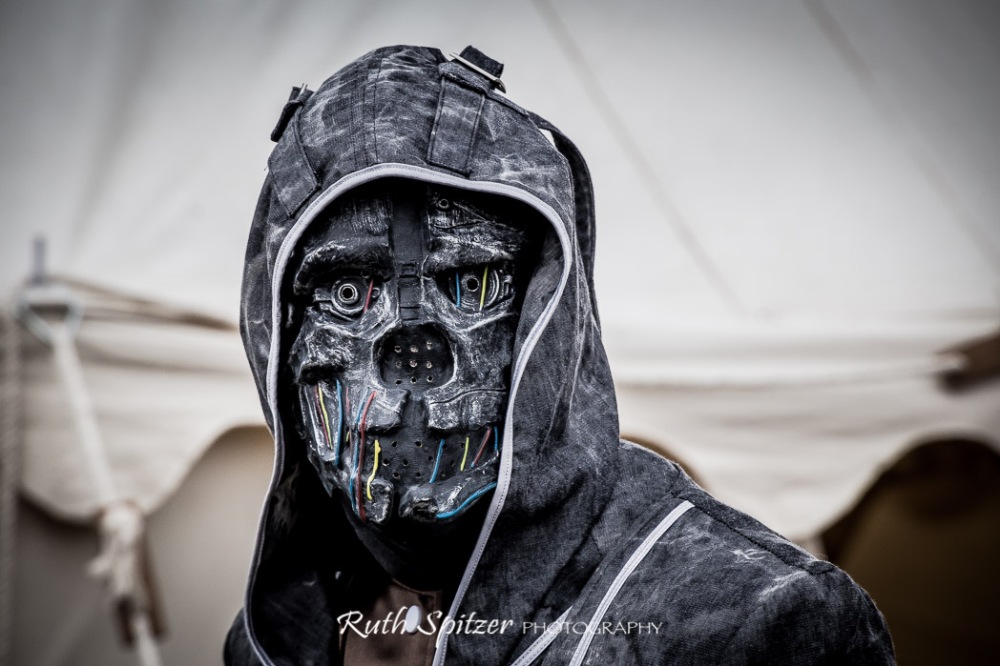 I highly recommend a visit to Lithgow Ironfest.