I’ve just turned the last page of my book, and can’t remember when last I’ve been so disappointed and dejected by a book ending.  Totally engrossed in this book, I’ve been through a myriad of emotions as each chapter unfolds; from anger, to disbelief, to puzzlement.  Frustration, a mild case of intense dislike, more anger, boredom and then as we’re gearing toward the last 100 pages, your anticipation builds.  You’re so eager to get to the part where you’re hoping the authors will give you some insight into Ivan’s motives, his thought process.  You want to know the man, what makes him tick? It becomes an obsessive desire to want to know.  You can’t think of anything else.

I think I might have crossed into fixated territory as I’ve Googled everything ‘Milat’.  And what fascinating finds there are over the glorious World Wide Web.  How did we ever function and prosper without it?

The first aspect I was eager to discover is the visual.  This book depicts Ivan as a ‘chick magnet’.  They often refer to him with his trade mark ‘Merv Hughes’ moustache, which turned out to be a crucial piece of evidence from a surviving victim.

Naturally being non Australian born, having absolutely no idea what the reference to ‘Merv Hughes moustache meant?  Never fear, trusty Google solved that mystery for me. I’m the first to admit I’m not a big fan of facial hair.  I prefer my men smooth, and so my first reaction upon seeing Ivan with his ‘merv hughes’… well, yuck.  But I can somewhat assume that must have been the look in the days, hence the woman flocking to Ivan.

I digress and reiterate again, a bit of an anticlimax.  I’ve been through several thousand words, page after page after page.  Read till 3am some mornings, disregarding sleep and the fact that I have to be up in 3 hours for work, missing my train station on the odd occasion, so immersed was I. 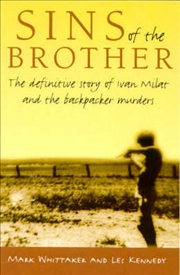 So completely occupied and fascinated by this dysfunctional, dishonest, disrespectful family and the hurt they inflicted on so many.    Mark and Les (authors) do an outstanding job of relaying so much intense detail over so many years.  It takes you through the Milat Parents’ life and their growing brood, the direction each child takes, the misfits, the crimes, prison time, an often occurrence throughout their childhood for many a sibling.  And half way through,  it gets a bit tedious as we’re introduced to the travel habits of all the backpackers and their families, their birth countries, then moving on to the start of uncovering the bodies by a curious bushwalker in the Belanglo State Forest.  The task force assigned to the case, the house raids on the various Milats.  The overwhelming array of guns, knives, and backpacker memorabilia and personal belongings found.  And a 4 month trial with over 100 witnesses, with a resounding guilty verdict, purely on overwhelming circumstantial evidence. Ivan’s last words upon a guilty verdict “I’m not guilty of it.  That’s all I have to say”.

As you get to know him throughout the book, you come to expect such an arrogant comment.

And that’s where the story ends; life imprisonment with no eligibility for parole.  And to this day Ivan has still refused to give an interview behind bars.  So sadly we’ll never get inside his head, which just reinforces the disappointment. The expectations of reading about such horrific events, at the very least is to understand what would possess a human being to engage in such inhuman behavior.  It’s our natural morbid curiosity to want to know!  Back to Google it is for me to try and discover more.

A colleague at work mentioned a movie based on the book, ‘Wolf Creek’.  I immediately dialed my local DVD store for a copy, picked it up that same night, dashed home, excitement building.  The movie starts off so incredibly slow, you’re tempted to turn it off and rather watch re runs of Faulty Towers for some entertainment.  But I was adamant and curious as hell to see how it compared to the book, hoping for some really intense scenes.  Eventually even that turned out to be a let down.  The entire movie is based on three kids, heading off for a hike, their car breaking down, Ivan coming across them to offer assistance and tow them back to his place for repairs, they wake up the next morning gagged and tied down and so the torture begins. Not nearly as gruesome as I was expecting.  And again, the book depicts none of this, which we’d only really know if Ivan gave up the true details.  The only comparison between the book and movie are the manner in which the killings occur –  savage. A signature MOD for Ivan and whomever acted with him. Speculation still exists.  Will we ever know?