On the banks of the Parramatta River at Homebush Bay, you’ll find yourself gaping in wonder as you gaze upon 1140 tonnes of a beautiful rusted steel-hulled steam collier,  a mere few meters from where you’re standing on the bank.  The SS Ayrfield, one of the four shipwrecks that currently reside permanently in a state of gorgeous decay at Homebush Bay that served in WWI and WWII. The SS Ayrfield can essentially be classified as a floating rusted relic forest.  It truly is a sight to marvel at.

Where might you find this larger than life wonder and 3 others?

A short ride west of Sydney CBD toward Sydney Olympic Park, home to our world class sporting stadiums that hosted the 2000 Summer Olympic Games, amongst a myriad of additional wonders that make up Olympic Park, you’ll find yourself meandering along Bennelong Parkway enveloped by lush vegetation or via Bicentennial Park, destination Wentworth Park a.k.a Homebush Bay, along the south bank of the Parramatta River, west of Sydney in the state of New South Wales.

Did you know that Olympic Park, aside from offering residential accommodation, commercial real estate, a range of recreational activities and facilities, 124 acres bushland and 15 miles of waterfront, was once actually used as a ship-breaking yard, parts of it anyway, back in 1976.

The ships hulls, barges and vessels in Homebush Bay over 75 years old are protected by The Commonwealth Historic Shipwrecks Act 1976 and any relics over 50 years old in lakes and/or rivers are  protected by tthe State of NSW Heritage Act 1977.

I for one am extremely grateful for these Acts put into place to preserve history and allow us the luxury to view these beautiful rusting relics.

Some of the wrecks that are still visible and what remains of them at Homebush Bay are:

“A 1140 tonne steel-hulled collier stretching 79.1 m log. Built in the UK in 1911 and registered in Sydney in 1912 as SS Corrimal. It was commissioned to transport supplies to American troops stationed in the pacific regions during WWII. In 1951 and was later sold to Miller Steamship Company Ltd and renamed SS Ayrfield where she operated as a collier between Newcastle and Sydney transporting coal. By 1972, the hull had been broken up and now resides permanently in Homebush Bay.”

This collier is certainly the star of the show and a photographers delight as it’s so close to the bank and in its current position, you’re privy to the most spectacular sunsets offered as a backdrop highlighting the texture of the aged steel and an overgrown very happy and healthy forest that has taken over majority of the ship.  Making it a truly remarkable centre piece amongst the remaining wrecks. 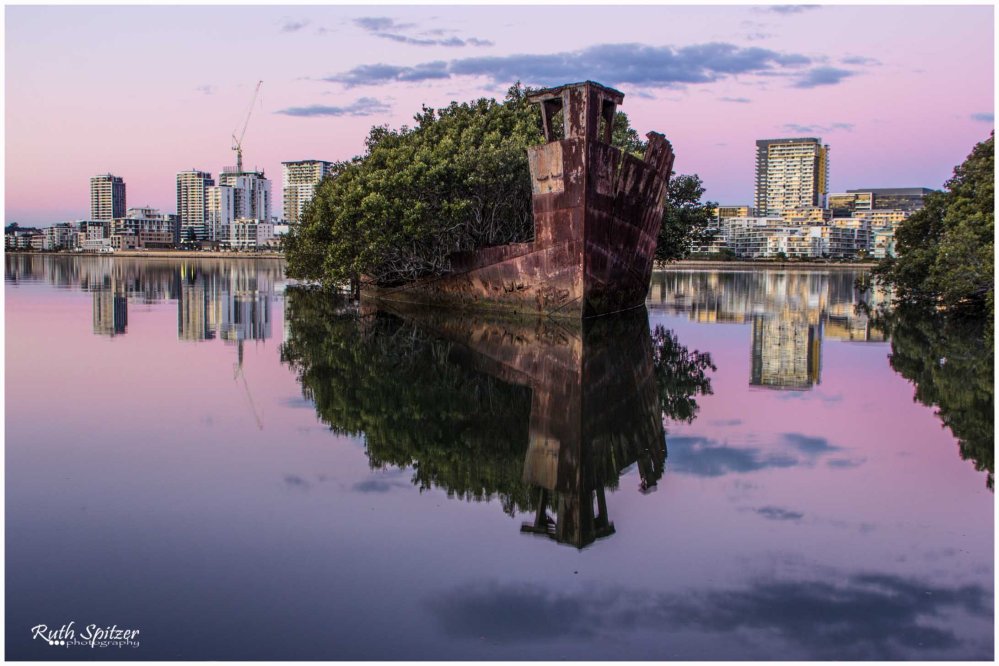 The full length of what remains of the SS Ayrfield that is now predominately overgrown by vegetation and the remains of hull  located near the mouth of Haslams Creek with the bow pointing towards the shore. 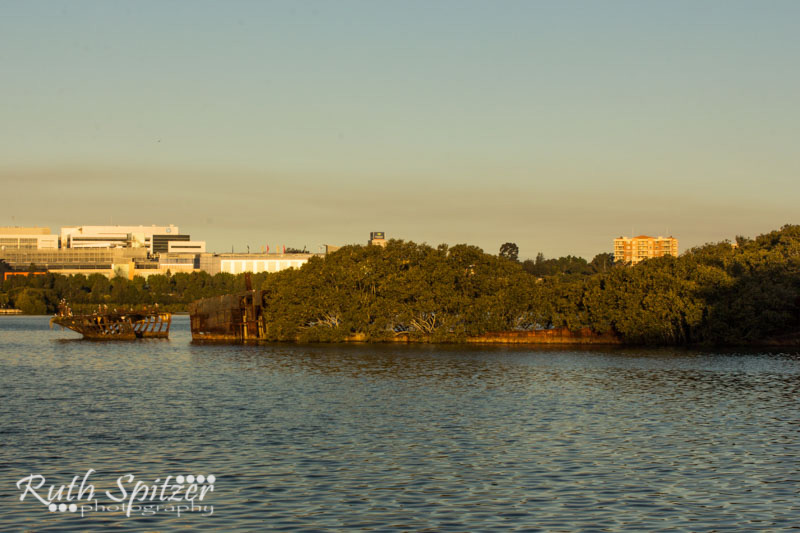 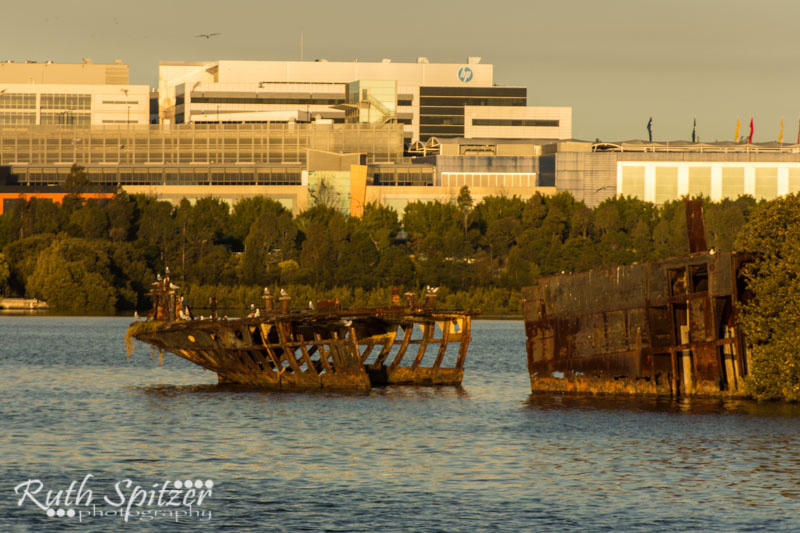 “A steel-hulled, boom defence vessel of 971 tonnes and 54.25m in length. It was built at Cockatoo Docks and Engineering Co. Ltd in Sydney and launched on 16 August 1941. A boom is a net held together by steel rings and supported in the water by floats. The boom gallow, projecting from over the bow of the vessel, was used to lower and retrieve the nets placed across the harbour entrance.

There were four boom working vessels built at Cockatoo Island during WWII for the Royal Australian Nav, once of which was Karangi, launched 22 December 1941. All four ships assisted in laying the boom defences of Darwin and were there when the first Japanese bombing raid took place on 19 February 1942.

On the morning of Thursday 19 February 1942, the first Japanese air attack on Australia opened and the Karingi was partially damaged. Thereafter she was stationed at Darwinutil end 1943, the served in Western Australian waters until 1952, thenregittee at Garden Island in Sydney. In 1953 and 1954 she returned to service in WA and continued service until 1957 before being placed in unmainted reserve in Sydney Harbour until 1965,

The Karangi was sold to L. Bookluck of Enmore on 8 September 1966 and partially scrapped. In 1970, what remained was removed to Homebush Bay for breaking-up.  She now lies on the shore side of the tug Heroic with its bow pointing south.”

“Weighing 1371 tonnes and 71.65m long. Built in the UK in 1924 and purchased by a company in Melbourne. It was used to transport coal between Hexhem and Mortlake. On 31 May 1942, during WWII SS Mortlake Bank entered Sydney Harbour passing through the anti-submarine boom net when the Japanese midget submarine (M-24) made entry under the ship’s keel.

The vessel has been broken up and only the stern section and part of the bow remain floating approximately 50m north east of SS Ayrfield.” 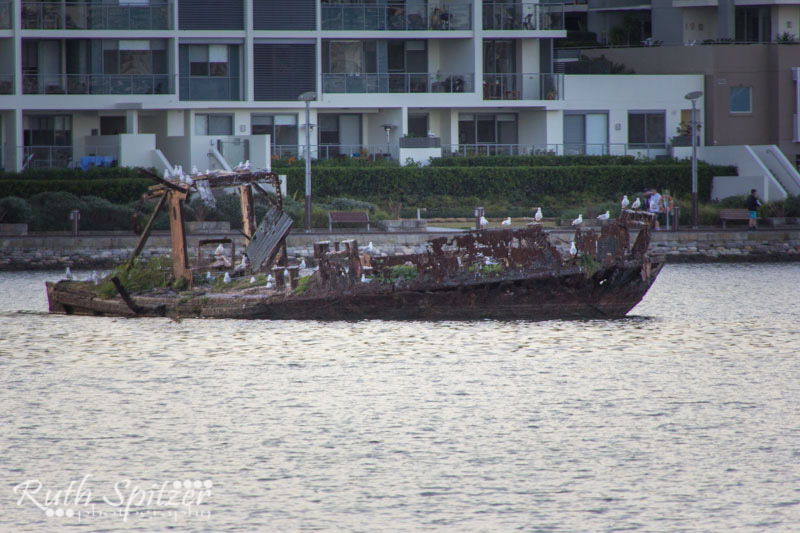 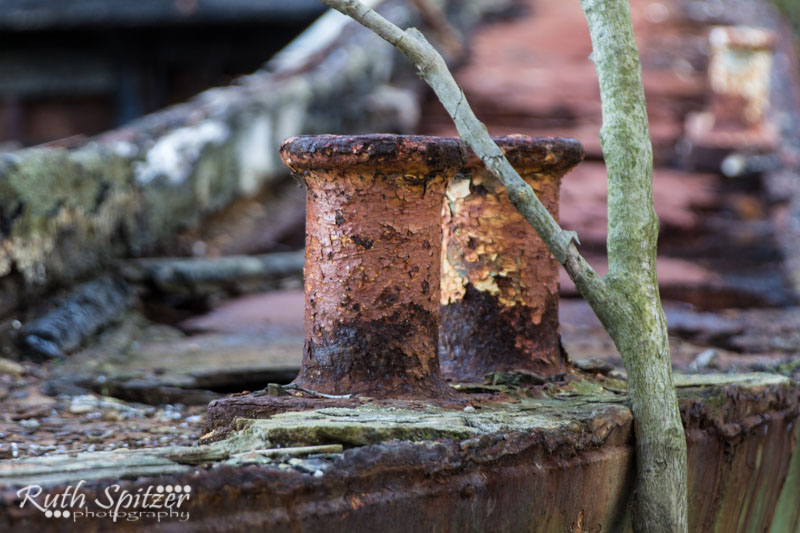 The Wrecks of Homebush Bay:  http://www.afloat.com.au/afloat-magazine/2008/may-2008/The_Wrecks_of_Homebush_Bay#.VeVhR_mqpBc